Tory Lanez is no stranger to causing a stir online, and his latest video seems to be doing that all over again.

The “Luv” singer posted footage of him dropping $35,000 at high-end Canadian department store, Holt Renfrew, after he claims that employees believed he wouldn’t buy anything.

The video shows the Chixtape songwriter focusing his camera on a male employee at the store, yelling at him while he shows off the items that he purchased.

Tory wrote a caption over the video that explains why he seems to be upset, as well as why he decided to spend thousands of dollars on his purchases.

“35,000 in HOLT RENFREW…cuz this Nigga tried to play me like I was broke,” Tory wrote on the video.

Even though he was able to prove to any potentially doubtful employees that he could spend money in the store, many fans on social media are not too happy with his extravagant move to prove a point.

Some commenters have criticized the “Litty” vocalist for giving his money to the brand if employees were, in fact, discriminating against him.

Some fans even say that he should have rung the items up, shown that he could have paid for them, but then walk out of the store to make sure he didn’t give them his business.

Either way, employees at the store probably won’t be underestimating the singer’s pockets anymore.

Watch Tory’s video footage from his encounter with a Holt Renfrew employee below to see what happened. 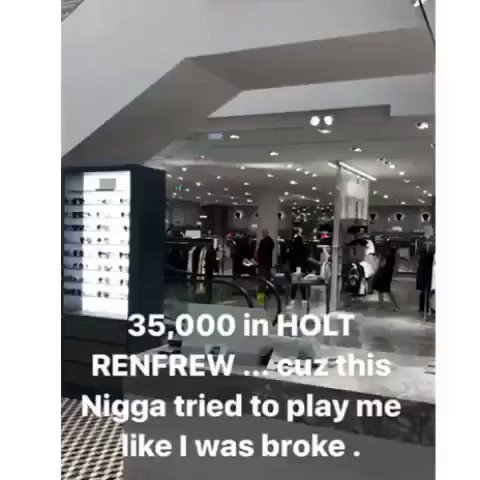